In most cases, statements are executed in order: the first statement in a function is executed first, followed by the second, and so on.

The general form of a loop statement in most programming languages is shown below. 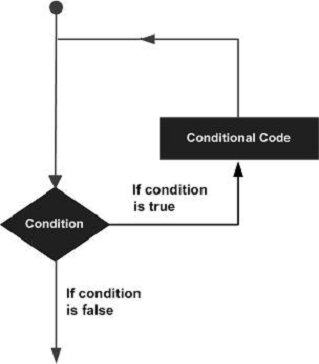 Control statements in loops alter the execution sequence. All automated objects generated in a scope are deleted when execution exits that scope.

The following control statements are supported by C.

If a condition never becomes false, a loop becomes endless. For this, the for loop is typically employed. You may construct an eternal loop by leaving the conditional expression empty since none of the three expressions that make up the 'for' loop are necessary.

It is presumed that the conditional statement is true when it is not present. Although you may have an initialization and increment expression in C, the for(;;) construct is more often used to represent an endless loop.

while loop in C

In the case when we don't know the number of iterations ahead of time, we can utilise the while loop in C. The while loop executes the block of statements until the condition provided in the while loop is fulfilled. A pre-tested loop is another name for it.

in C for loop

The for loop is utilised when we need to execute a section of code repeatedly until the provided condition is met. A per-tested loop is another name for the for loop. If the number of iterations is known ahead of time, the for loop is preferable.

The syntax of the for loop in C is as follows: